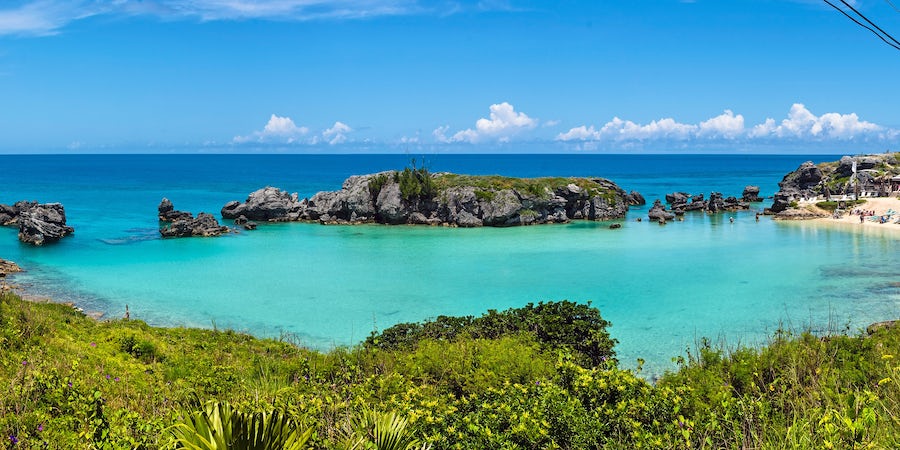 If you're looking for a no-fuss vacation, with plenty of opportunities for R&R, the British colony of Bermuda could be just the answer. The tiny country has an amazingly high repeat visitor rate, and we say it must be a tribute to the simple pleasures this group of islands has to offer: blue skies meeting blue waters, and pink sand beaches lying along winding roads sprinkled with cottages washed in lemon yellows, baby blues and pistachio greens. Not to mention Bermuda's sophisticated museums; high-end shops, plentiful golf courses, historic sites and multitude of dining options.

The eight largest islands, connected by causeways and bridges, measure just 22 miles in length and barely two miles across at the widest point -- so you can travel from one end to the other in about an hour and from north to south in less than 15 minutes.

In the past, Bermuda had set rather rigid guidelines for cruises, including a stipulation that ships had to remain there for three consecutive days per sailing and a rule that prohibited larger ships from calling. But in more recent years, Bermuda has opened itself up to more mid-size and large ships and has added some variety to the types of cruise itineraries that are permitted (though only a handful of sailings feature ports outside of Bermuda). With more choice, Bermuda cruise options make this traditionally more costly vacation destination a little easier on the wallet -- though don't expect any bargains once you disembark the ship.

Bermuda's cruise season runs from April to early November, with high season being June through August. There's no rainy season per se, but October is the rainiest month; summer temps are hotter and more humid than the mild spring and fall months. The majority of Bermuda cruises take place during Atlantic hurricane season; be aware that peak storm season falls between August and October. While Bermuda is usually affected by hurricanes only once a year, a Bermuda cruise disrupted by a storm could turn into a Canada/New England sailing. If you want to travel in the shoulder season, May is your best option.

Royal Caribbean, Celebrity and Norwegian Cruise Line are the only mainstream lines sailing regular Bermuda cruises. They all dock in King's Wharf. As for luxury options, Regent Seven Seas has a handful of sailings that combine stops in the Bahamas, Bermuda and the southeastern United States. Other lines that offer the occasional call in Bermuda include Azamara, Carnival, Holland America, MSC Cruises, Oceania, Princess, Silversea and Windstar.

These days, there are few Bermuda itinerary options, most of which sail from the Eastern Seaboard.

Bermuda Only: The most common itinerary includes sailings that are five to seven nights long and call only in Bermuda, typically with a two- to three-night stay in King's Wharf. Occasionally a ship's itinerary will include a stop in Hamilton or St. George's as well. Common departure ports for these sailings include Boston, New York, Cape Liberty/Bayonne and Baltimore. (Norwegian also combines weeklong Bermuda-only sailings with weeklong Canada and New England cruises for 14-night back-to-back sailings, often starting or ending in Quebec City.)

Transatlantic/Repositioning: If you're looking for a cruise that offers just a day or one overnight in Bermuda, with visits to other destinations, look for repositioning cruises that call there at the beginning or end of Bermuda's cruise season. Many of the occasional callers mentioned above dock in Hamilton or St. George's, usually on their way between a seasonal U.S. homeport and a seasonal European one. Some of the more mainstream lines like Princess and Carnival do dock in King's Wharf. (You can read more about repositioning cruises here).

Bermuda & Southeast U.S.: A few cruise lines -- such as luxury cruise lines Regent Seven Seas and Oceania -- feature roundtrip Florida cruises that combine stops in Hamilton and St. George's with visits to ports in the Bahamas and throughout the southeastern United States.

King's Wharf: King's Wharf is the big dog in Bermuda, as this is where the big ships that call regularly dock. Upon your arrival, you'll find yourself inside the bustling Royal Naval Dockyard, Bermuda's most visited tourist site. King's Wharf is rich in naval history, and the Bermuda Maritime Museum houses recovered treasures from the island's shipwrecks. Visitors can trek up nearly 200 steps to the top of a historic lighthouse, where they can enjoy a charming repast in the lighthouse's tea room. Shop duty-free inside the Clocktower Mall or pick up a scrumptious rum cake at the Bermuda Rum Cake Company, hop a ferry to anywhere, or stroll through the Arts Centre to view the works of Bermuda's premier artists. If you want to escape the crowds, take a bus, taxi or scooter ride just 10 minutes away from the pier, and you'll find private spots for exploring and kicking back at the beach.

St. George's: St. George's was Bermuda's first colonized island, and as such, its architecture and history make it a World Heritage Site. The town is full of charming alleys and cobblestone streets, making for scenic walks and lots of photo ops. Because you'll be docking at Ordnance Island, you'll find yourself up close and personal with the first historical stop -- a replica of the 1610 Deliverance. The Bermuda Cedar wood ship was built by the 150 shipwrecked survivors of the Sea Venture so they could continue their sail to Jamestown. Touring it will give you a true sense of just how difficult it was for the passengers and crew to journey in such cramped quarters. When you're done, cross over the bridge and you'll be in King's Square. As you look around at the buildings, you'll see how little has changed over the last few hundred years.

Hamilton: Regardless of where your ship is docking, Hamilton is a must-visit destination. From shopping to sightseeing, the island's capital is jam-packed with plenty of day or nighttime options. Ships typically dock right on Front Street, which means you'll be steps from the action. But if you're docked in King's Wharf, consider taking the ferry or bus over. We suggest seeing the town on foot, but you can always hop on any one of the surreys lined up outside the terminal or get a seat on the Bermuda Train departing from Albouy's Point down the block.

Whatever you do in Hamilton, make sure you head back to Front Street around 6 p.m. Wednesday nights if your ship is overnighting (May through August). That's when the party begins sans traffic. So bring your dancing shoes and a big appetite for the tasty tidbits offered from the food stands lined up shoulder to shoulder.

Save money by having your meals on the ship. Bermuda is not a budget vacation destination, so if your funds are limited, you may want to return to your ship for meals and perhaps just purchase a few snacks while ashore. You'll also find most souvenir shop wares to be quite pricey, so if you want to bring home something to commemorate your visit, prepare to shell out some cash.

Renting a scooter is a fun and affordable way to get around -- especially because car rentals are prohibited -- but be sure to consider that you will have to drive on the left-hand side (British colony, remember?), which might be disorienting if you're not used to it. Roads are often very narrow and winding, so this option is probably best for cruisers who have some experience getting around on two wheels.

Have beach and casual attire at the ready. Bermuda is a much more conservative and formal destination than ports you may be familiar with in the Caribbean. Bikinis and short shorts are a no-no anywhere but the beach, and when dining in port you'll want to be sure that your attire adheres to the dress code of the restaurant you plan to visit.

Related: What Should I Wear on a Cruise? A Guide to Cruise Line Dress Codes

Do your research before packing your golf clubs. Bermuda has more golf courses per square mile than anywhere else in the world, and cruise lines are recognizing the region's prowess in the golfing world with special onboard programs for Bermuda-bound duffers. Be sure to check if your sailing is featuring any special enrichment offerings or golf-themed shore excursions.

Bermuda is a great vacation destination for families, with many kid-friendly activities. The Bermuda Aquarium, Natural History Museum & Zoo in Hamilton features a large collection of tropical marine fish -- including the North Rock exhibit, a 140,000-gallon tank designed as a living replica of one of Bermuda's natural coral reefs. Other pluses for families? Beaches are clean and safe, and English is spoken everywhere so it won't feel too foreign for little tykes. And it doesn't hurt that shorter itineraries from convenient drive-to homeports are available.