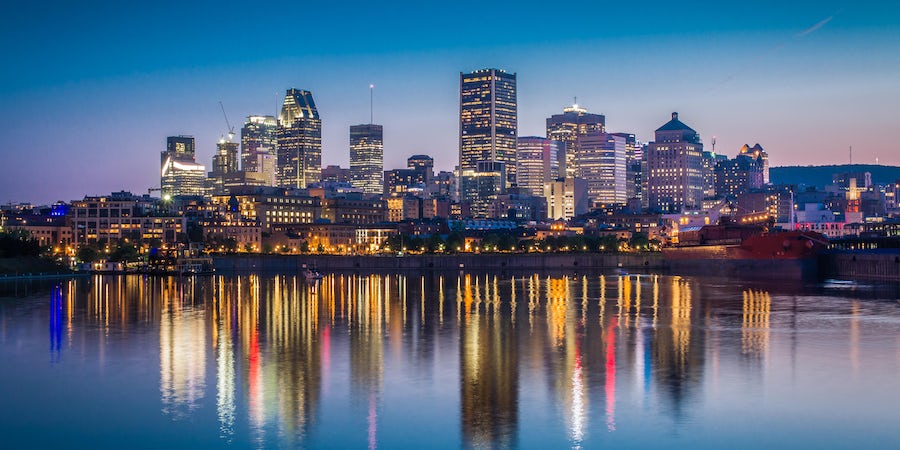 Canada/New England itineraries aren't just limited to fall foliage runs these days. In fact, the sailing season in this postcard-perfect region actually spans a full six months (from May through October). We've set out to round up some of the very best excursions offered by both cruise lines and independent outfitters alike in the region's 10 most popular ports. Whether the great outdoors, historical sites or foodie-focused outings are more your speed, you'll find it on a Canada/New England cruise.

For nature lovers, Acadia National Park -- with an entry point set just a few miles away from the Bar Harbor port -- is the hands-down highlight of any New England sailing circuit. With nearly 160 miles of hiking trails, this rugged natural oasis delivers cruisers into dramatic rocky headlands abutting the Atlantic and come filled with beaches, cliffs, woods, lakes, ponds and peaks (seven precisely, each of which soar above 1,000 feet).

Many cruise lines and independent operators bring passengers to tackle the terrain on scenic tour bus/trolley tours with stops for photo ops and view points, though these outings can get crowded during peak periods. If physically possible, consider signing up instead for an outing that will get you some proper on-the-ground hiking time with more elbow room to spare: One such easy-to-navigate and commonly offered guided trek is on the waterfront Ocean Trail.

Any baseball fan or history buff who wants to walk the hallowed ground of Babe Ruth's first home, the oldest Major League Baseball stadium in the U.S. (dating to 1912) and the home of nine-time World Series winners the Boston Red Sox needs to visit legendary Fenway Park. On a guided tour, you'll take in highlights, such as the famous "red seat" (which marks the point of the longest home run within the park) and the hand-operated scoreboard, before getting some time to browse the official Red Sox gift shop.

Bonus: Baseball season overlaps nicely with scheduled cruising to the region; if your port visit syncs with one (or if Boston is your embarkation or disembarkation point), you might be able to catch a home game independently. Notably for cruisers, early-afternoon home games are scheduled on select dates (mostly on weekends) from April through September.

Boston loves its Ducks -- these amphibious WWII-style vehicles are a city institution. And it's certainly a unique means by which to explore the many areas that you might not otherwise get to see. Kids (of all ages) will love riding the Ducks throughout the city, before splashing straight into the Charles River. Many of Boston's highlights are featured en route, including Boston Common, parts of the Freedom Trail, Cambridge and even a glimpse of Fenway.

This coach tour incorporates a ride through historic Charlottetown and then allows you to explore the famous "Anne of Green Gables" homestead in Cavendish. The Prince Edward Island landscapes along the way grant dramatic surrounding scenery, including sandstone cliffs, crashing waves and reddish sands and soils that are a shutterbug's dream.

Gigantic boulders worn smooth by millions of years of pounding Atlantic waves surround the natural landscape here, anchored by a picturesque century-old lighthouse (the most photographed in Nova Scotia). About a 45-minute drive from Halifax, this picture-perfect setting is Peggy's Cove, a tiny fishing village complete with bobbing lobster boats and colorful homes and shops.

You can watch the movies and read the books, but it's hard to get much closer than this for truly contextualizing the Titanic disaster. It's been just over a century since the Titanic sank about 750 miles from Halifax; 150 of the victims are still buried there, and the Maritime Museum of the Atlantic has engaging exhibits and artifacts chronicling the disaster.

This tour will connect the dots, while you view actual items from the Titanic, hear the stories and lore that grew from the ship's sinking and learn more about the overall role that Halifax played in the aftermath.

When you're in a big city like Montreal (a popular starting and ending point for regional cruises), you'll have to accept that you just won't make a real dent in it without extending your trip. An especially good fit for those short on time or with mobility issues, a classic, half-day, guided city sightseeing coach tour takes in most of the essential highlights, with photo stops at essential spots, such as Notre-Dame Basilica, Saint Joseph's Oratory, Mount Royal Park, Olympic Stadium and Old Montreal.

If you'd rather immerse yourself a bit more by pounding some pavement in the city, Old Montreal is an excellent quarter to tackle. A guided walking tour here brings you through the historic nabe's labyrinthine streets, with its French-flavored atmosphere and sights, such as Notre-Dame Basilica, Champ de Mars, City Hall, Place Jacques-Cartier and Bonsecours Market. En route, you'll learn all about the district's history, architecture and culture.

Cliff Walk and the Breakers

Newport is best known for two things: its collection of lavish Gilded Age mansions and its pretty seaside setting. Combine a taste of both on a tour that brings cruisers for a guided stroll along the scenic Cliff Walk, along with a visit to its most famous mansion, the Breakers.

The easy coastal trail brings you past beaches, rocky shores and several grand Gilded Age homes. The Breakers, considered to be Newport's most elaborate mansion, was a retreat for the affluent Vanderbilt family. Architect Richard Morris Hunt designed its Italian Renaissance style, and its interiors overflow with opulence; 70 rooms brim with fine furnishings, works of art and soaring ceilings embellished by chandeliers.

Portland Discovery by Land and Sea

Explore Portland's highlights both on the ground and by sea via its most popular shore tour. You'll hop aboard an open-air trolley for a lay of the land and a glimpse of the landmarks of Portland proper, before making way for the photogenic Portland Head Light lighthouse. There's then a break for lunch and shopping in the Old Port area, before embarking on a 90-minute narrated boat tour of the harbor, which will bring you up close to several lighthouses, Civil War-era forts and inner-bay islands frequented by harbor seals and seabirds.

Portland's culinary scene, powered by locally sourced ingredients from both land and sea, is simply world class; in fact, it was once named "Restaurant City of the Year" by Bon Appetit Magazine. See what the buzz is about by digging in on a foodie walking tour of Portland, during which a guide will share his/her culinary savvy while escorting you to four of the city's most notable gastronomic establishments. You'll sample fare at four stops within walking distance of the port, which might include options like a brewery, bakery, bustling lunch spot or old-school food purveyor.

French-flavored Quebec City overflows with history and charm -- don't miss a beat by embarking on a guided coach tour that will take you around to all of the essential photo-stop highlights, including the Place-Royale square, Dufferin Terrace and Chateau Frontenac. The tour tacks on, too, a visit to the thunderous Montmorency Falls, on the outskirts of the city. An impressive sight indeed, the falls measure nearly 100 feet higher than Niagara Falls and drop down to meet the St. Lawrence River below.

Absorb the rhythm of daily life in Quebec and come face to face with its intricacies by exploring it on foot. A guided walking tour lets you wander through 400 years of history along the atmospheric cobblestoned streets within the UNESCO-protected walled city of Old Quebec. The tour incorporates a stop at some of city's most famous landmarks, including Place Royale, the Petit-Champlain street and Dufferin Terrace. Plus, enjoy a break at the hilltop castle-hotel Chateau Frontenac, where you can reboot over tea and pastries.

Fundy By Land and Sea

One of the region's unique natural attractions is found in Saint John, where Canada's Bay of Fundy meets the Saint John River. Dubbed the Reversing Falls Rapids, the tides are so fierce here, it causes the river to reverse and run upstream. This bus tour brings you around town to take in Saint John highlights, including a photo op of the phenomenal bay at Fallsview Park. Plus, the excursion bundles in an enclosed sightseeing boat tour of Saint John Harbor and the Bay of Fundy, offering yet another perspective on the Reversing Falls Rapids.

Canada's oldest continuously operated farmers market is set within an easy 10-minute walk of the cruise port and makes for a delightful place to stroll and sample/shop for local fare and wares. Opened in 1785, with its current airy structure dating to 1876, you can pick up local handicrafts, peruse traditional farmers market stands or sit down to tuck into some local dishes.

Tip: Try a breakfast bagel topped with dulse, a tasty dried seaweed sourced from the Bay of Fundy, from old-time establishment Slocum & Ferris. (If you want some further insight on don't-miss grub, you can sign up for a guided food tour of the market, too.)

From the port in Sydney on Nova Scotia's Cape Breton Island, two of the area's most worthwhile attractions can be combined on one seamless shore excursion. Hit up the pretty lakefront village of Baddeck -- set on Bras d'Or Lake (about an hour's drive from Sydney) -- known for its scenery and seafood eateries, where you'll have some time for an independent visit.

Related: Canada/New England Cruises Shine as Ships Return to Quebec and the Maritimes: Just Back from Holland America Line

The village's big claim to fame, though, was serving as the longtime home to inventor Alexander Graham Bell. A museum here is dedicated to Bell's work via artifacts, photographs and multimedia exhibits. The museum does a good job at documenting his most famous invention, the telephone, while delving into his work in other fields, too, including medicine, science and technology.