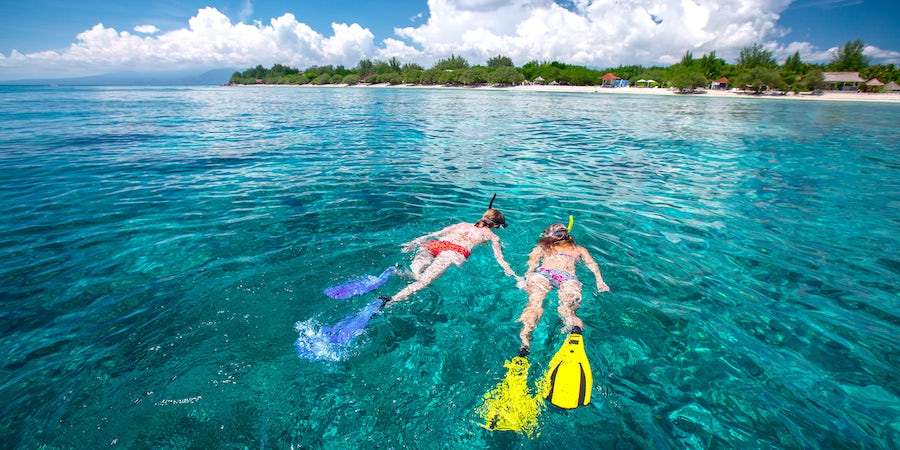 The Eastern Caribbean provides variety for divers and snorkelers, from Florida's underwater state park in Key Largo to some signature wrecks like the RMS Rhone in the British Virgin Islands. The mostly shallow shorelines of the islands listed here make Eastern Caribbean cruises perfect itineraries to get your face wet.

If you plan on diving more than once or twice, it's worthwhile to bring your own gear (if you have it); even casual snorkelers might consider bringing their own mask and snorkel for both fit and hygienic purposes. Newbies can take a Discover Scuba Diving "resort" course -- offered by many dive shops -- which takes uncertified divers down to a depth of 40 feet, accompanied by an instructor, of course.

Here are some of our top cruise port choices to explore life underwater.

1. Nassau or Grand Bahama, The Bahamas

There are more than 700 islands in The Bahamas, and the island chain is a veritable buffet for scuba divers. For day excursions, you'll most likely be confined to Nassau or on Grand Bahama near Freeport, where the ships dock, but never fear: There's plenty of underwater action to be had.

On Nassau, adventuresome divers have the opportunity to do a two-tank shark dive. On the first, divers descend onto a wall where the sharks will follow them to a feeding site. (The intelligent animals know what's coming.) On the second, the group drops as a whole to the sea floor and sits in a semicircle while a trainer feeds the sharks from a bait box placed in the center of the circle.

At Grand Bahama, divers can observe tiger sharks up close on a two-tank excursion or stick with a gentler experience on the reef. Snorkeling's not great around Nassau due to development, but there are some coral to be seen at Love Beach.

Tiny Grand Turk in the Turks and Caicos is a gem for divers. Do yourself a favor and hightail it from the cruise port to Cockburn Town, where you'll find a number of dive shops strung along a sleepy oceanfront street. Just a few hundred yards from shore, the crystal-blue water gives way to inky cobalt where the wall drops away to 7,000 feet.

Most dives are on the west side of the island, with the reef starting in just 30 feet of water. Visibility averages 100 feet at sites like The Aquarium, where the reef rises and falls to create several sand canyons. There are healthy brain coral, boulder star coral and sponges, and divers will frequently encounter Nassau grouper, squirrelfish, green turtles and a host of small reef fish.

The eastern region of the Dominican Republic, home to both La Romana and Samana, has experienced an explosion in vacation options, and scuba options have followed suit. The once sleepy fishing village of Bayahibe, about 30 minutes from La Romana, is the launching pad for many of the island's best dives.

At El Penon, you'll find a reef ledge overrun with life, from green morays and nurse sharks to giant crabs. The wreck of the St. George sits in about 100 feet of water at the stern and offers exploration of the wheelhouse and hallways. Snorkelers will want to check out the coral around Saona Island, part of the protected Parque Nacional del Este.

The BVIs are not only a playground for sailboats, but for divers and snorkelers. The granite boulders of The Baths on Virgin Gorda are a must-snorkel, even for the hardest of hard-core divers.

After that, take your pick of wrecks like the famous RMS Rhone, a royal mail steamer that went down with 123 passengers in 1867 -- the BVIs' signature dive and shallow enough to be enjoyed by snorkelers. The Chikuzen, a 246-foot-long refrigeration ship lying between Virgin Gorda and Anegada is also worth a few tanks; it attracts sharks, cubera snappers and a resident 600-pound goliath grouper.

There's also Spyglass Wall, which features lots of sea fans and small fish, such as damselfish, wrasse and fairy basslets. Keep a lookout for southern stingrays and passing tarpon.

St. Thomas is one of the Caribbean's most popular cruise ship ports, but luckily for divers, it's also a good jumping-off point for some great underwater sightseeing.

The waters around St. Thomas are littered with wrecks; the most requested is WIT Shoal II. Originally a warship, it sank in 1984 a few miles southwest of the St. Thomas airport. There are five levels of decks to explore, and the ship is home to horse-eye jacks, stingrays, lobster, crabs, cup coral and sponges. The ship sits in 85 to 90 feet of water, though, so it's best for advanced divers.

For a neat twist, snorkelers should also check out Virgin Islands Ecotours mangrove tours. You'll kayak and snorkel through the trees, which shelter juvenile reef fish of all kinds, as well as stingrays and turtles in the seagrass.

Of all the U.S. Virgin Islands, St. Croix is the most well-known to divers. You'll be spoiled for choice with wrecks, reefs, walls and a fantastic macro dive at the Frederiksted Pier (a terrific night dive, if possible). Scattered debris under the pier provides habitat for a number of sea animals, from juvenile drums and smooth trunkfish to seahorses.

Butler Bay, on the west end of the island, holds a number of wrecks, including the Coakley Bay, a former oil refinery tugboat. Cane Bay is renowned as one of the finest shore dives in the Caribbean; swim out and you'll find the awesome wall, which plummets to 3,000 feet. It's home to soft coral, sponges and gorgonian sea fans.

Beginning snorkelers can check out Buck Island Reef National Monument, which has a marked snorkeling trail that points out different underwater flora and fauna you'll see along the way. Much of the elkhorn coral has been roughed up by hurricanes over the years, but enough of it thrives to make this a good spot to get comfortable with snorkeling.

Although it's not a major dive destination, St. Maarten does offer some sites worth taking the plunge for. There are a few wrecks, and shallow reefs also make the area great for snorkelers. The old Simpson Bay Bridge is surrounded by three sunken sailboats, and with a maximum depth of 50 feet, it's perfect for beginners. The remains of the bridge are encrusted with coral and sponges, and you'll spot moray eels, lobsters and stingrays.

Snorkelers (and any lovers of laid-back beaches, really) should head for Pinel Island, a tiny sand spit off French Cul De Sac, where you'll peel yourself from the water for a rum punch.

Dive itineraries in St. Kitts often include the M.V. River Taw, a 144-foot freighter that sits in about 50 feet of water. It was intact until 1989, when Hurricane Hugo broke it in two pieces, but it's still a good spot to see plentiful fish.

There are wrecks, reefs, walls and caves, too. At the Black Coral Reef site, divers can check out the eponymous black coral abundant at the site, as well as creole wrasse and snapper schooling along the wall's edge. At Monkey Shoals, a large coral atoll, flying gurnards and scorpionfish are frequently sighted, depending on the current.

White House Bay offers sheltered waters for snorkeling. While the beach is pebbly, the rocky bottom provides plenty of hiding places for fish.

Passengers on an Eastern Caribbean itinerary usually only stay in San Juan for a short period of time, meaning that sites such as Mona Island -- called the Galapagos of the Caribbean for its big pelagic fish -- or Cayo Lobito on Culebra are usually out of range.

Non-divers who want to get a taste of scuba diving can give it a try at Escambron Marine Park, a shallow cove and PADI training center that can get newbies down to 20 feet in just one session. This is also a good port to stay on top of the water, as Puerto Rico offers some of the few bioluminescent bays in the world. The best one is found on neighboring Vieques, but sign up for a nighttime boat excursion at La Parguera on the south coast and marvel as the tiny microorganisms turn neon blue when agitated by currents.