You may also like
Dismiss
Best Shore Excursions in 30 Caribbean Cruise Ports
Best Eastern Mediterranean Shore Excursions
What Are Tropical Cruises, and Which Is Best for You?
What Are Repositioning Cruises and Why Should I Take One?
Best Month to Cruise to Bermuda
Can I Cruise to Niagara Falls?
Things to Know About Lake Huron Cruises
6 Best Cruise Ports for Hiking in the Caribbean
Yenisei River Cruise Map
7 Best Beaches in Nassau for Cruisers 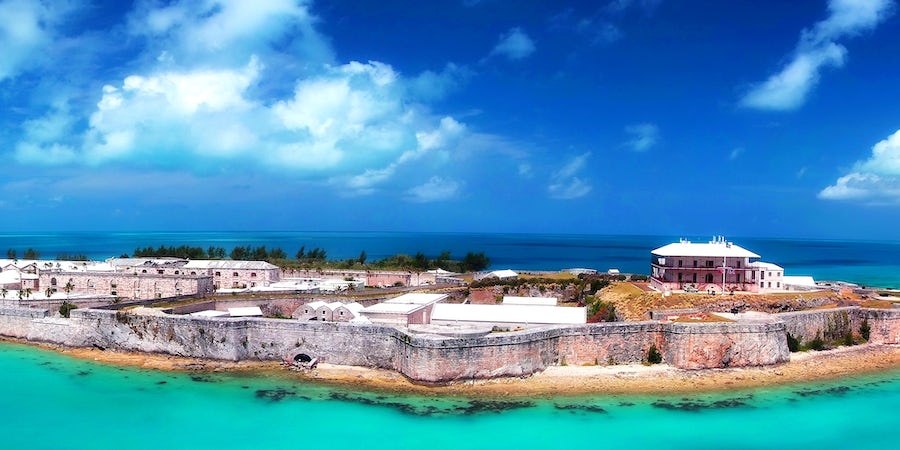 Much like the cruise industry, Bermuda has long been known as a vacation destination for the "newly wed and nearly dead." But of late, the islands have been attracting a younger, more active traveler than ever before. With some shorter itineraries out of drive-to homeports including Baltimore, Cape Liberty/Bayonne and Boston, it's become a more viable option for a wider demographic, because the often prohibitive cost of airfare can be factored out of the equation for northeasterners. Add to that the fact the British island chain has become a bit less stringent with its oft-fussy mindset and relaxed some of its infamous restrictions having to do with the number and size of ships in port, and you might just find yourself booked on a Bermuda cruise and hunting for the best in-port diversions sooner than you thought.

Bermuda has undergone a revolution in ship-sponsored excursion offerings -- the best of which highlight the archipelago's fabulous pink sand beaches, unmatched surplus of golf courses, stunning natural history and distinctive culture. Whether you have the luxury of three days or just one, check out our favorite outings for your next Bermuda cruise.

From delicate sea horses to neon pink flamingoes, the Bermuda Aquarium is a good introduction to the amazing native marine life and birds you'll be seeing during your visit. Tiny Bermuda enjoys one of the world's highest concentrations of limestone caves -- between 110 and 200. The most famous is Crystal Cave, discovered a century ago when two boys went chasing a cricket ball. Descend 120 feet below sea level where thousands of stalactites and stalagmites surround a 55-foot deep lake.

Who Should Go: Families, geology buffs and spelunkers. Good walking shoes are a must for the subterranean descent and return.

Why It's Extraordinary: Beneath subtropical Bermuda lies an underground network of caves dating to the Ice Age. Exquisite amber-colored stalactites hang like icicles and stalagmites inch slowly upward around the stunning crystal clear lake. After visiting the caves, you'll have time to explore the shops and eateries of Hamilton before returning to your ship via public ferry.

Experience Bermuda's barrier reef at night during an after-hours fishing adventure aboard the Jolly Roger, a 56-foot party boat. This catch-and-release operation will give you a chance see and fish for nocturnal species that are not visible during daylight hours, including triggerfish, snappers and jacks. You'll have no problem getting the hang of it with the help of your knowledgeable captain and crew.

Who Should Go: Novice and experienced sport fisherman.

Why It's Extraordinary: It's not often that cruisers get to experience the ports they visit at night, but because most ships remain docked in Bermuda for two to three days, you'll have the opportunity to see a different side of the islands -- nightlife that doesn't just include dancing and partying but allows you to get up close and personal with sea life that you wouldn't otherwise be able to experience.

This golf-obsessed island boasts the most courses per square mile in the entire world, but most are private. One notable exception is the Port Royal Golf Course, designed by Robert Trent Jones and owned and operated by the Bermudan government (along with St. George's and Ocean View). Located in Southampton Parish along the ocean, Port Royal has been played by luminaries from Babe Ruth to Jack Nicklaus, a regular.

Who Should Go: Avid golfers.

Why It's Extraordinary: With its challenging layout, breathtaking views and the Atlantic Ocean as the ultimate water hazard, Port Royal -- which underwent a $14.5 million makeover in 2009 -- is considered one of the world's great public courses. The 16th hole, chiseled into the side of a cliff with dizzying ocean views, is among the most photographed golf holes. Don't forget to bring extra golf balls (darn water hazards) and wear your Bermuda shorts and soft spikes.

For three centuries, Bermuda's treacherous reefs have doomed schooners, steamers, luxury liners and frigates. Because of the relative shallowness of the reefs, many of these shipwrecks can be enjoyed via glass-bottom boat. Among the more popular wrecks is the Constellation, a four-masted schooner that sank in 1943 and provided inspiration for Peter Benchley's novel, "The Deep." Other favorites: the French frigate L'Herminie that sunk in 1838 with 25 cannons still visible, and the iron-hull English bark North Carolina that hit the reef on New Year's Day, 1879.

Who Should Go: Families and anyone looking for a low-key way to wind down for the evening.

Why It's Extraordinary: The ghostly shipwrecks seen along the Bermuda Triangle Evening Cruise are not only fascinating, but they also attract spectacular marine life, and this tour offers an opportunity to see it all from an underwater perspective without having to exert a lot of energy after a long day of touring. Parrotfish, huge hogfish, octopus and speckled eels are just some of the colorful creatures that inhabit the wrecks. Of course, going out to this supposedly haunted site after dark ups the creepiness factor.

Slip Away to Harbour Nights

Being docked in touristy King's Wharf can make it difficult to get a feel for true Bermudian culture, but if you happen to be overnighting on a Wednesday -- which you will on most weeklong itineraries -- you can head into Hamilton where Front Street shuts down to vehicular traffic and opens up for a high-energy street festival. Shops with storefronts are typically open late during the festival, but you'll find the real treasures at the numerous booths selling crafts and traditional island foods. Ships' tours will provide boat transport and include a drink during the ride; once in Hamilton, you have free time to explore Front Street on your own.

Who Should Go: Families with children of all ages, seniors and anyone looking to interact with native Bermudans.

Why It's Extraordinary: There is no better way to experience a culture than to hit the streets for seasonal festivals and shop the local markets, and Harbour Nights is no exception. It is geared toward tourists -- as are most events in Bermuda -- but it's still the best family-friendly way to interact with the locals. Of course, any time there's music, great food and lots of people in one place, fun is sure to abound.

Paddling is a great way to enjoy Bermuda's outdoor playground, and glass-bottom kayaks make the views even better. Along with a buddy, you glide through warm, turquoise waters, passing secluded beaches, sheltered coves and bays, uninhabited islands and dramatic rock formations on this fully guided and narrated tour. All the while, you'll get to spy on the coral, turtles and other mesmerizing sea life below you. Suitable for all levels, from first-timers to expert paddlers, the excursion ends with a refreshing swim.

Who Should Go: Families with children 5 and older, active seniors.

Why It's Extraordinary: Discover Bermuda's extraordinary marine life without getting wet. A simple glance down at your kayak's glass panel reveals a rainbow parrotfish munching on brain coral or a green sea turtle gliding through the water. Plus, you'll have a great view of coastline animals including Bermuda longtails, egrets and various crustaceans.

Before cars were allowed on Bermuda in the late 1940's, a train dubbed "Rattle and Shake" served the island. Though the train was dismantled after cars were allowed, the rail line has been converted into a scenic 21-mile trail from St. George's in the east to Somerset in the west. A tour will take you on a portion of the trail with a beach break at the end. In addition to viewing the spectacular seascapes and lush vegetation along the way, cyclists with extra time can walk over to the historic Fort Scaur or visit the 17th-century Mott Family estate, both of which are easily accessed from the trail.

Who Should Go: Active travelers who enjoy hiking, biking and swimming, and families with older children and teens

Why It's Extraordinary: The historic railway trail gets you off the beaten path and lets you explore some of the less-touristed areas of the islands. It's a great choice for birders who can see flamingos and herons at Spittal Pond and warblers at Gilbert Nature Reserve. You'll even get to cool off with a swim after your ride.

If you're overnighting in Bermuda, you can enjoy a variety of cultural events and embark on a number of historic tours on your own -- from Gombey dancing and the Bermuda Philharmonic Society's early June outdoor concerts in St. George's to perusing Fort St. Catherine and the Royal Dockyard. To experience a lively bar scene -- and try the famous rum swizzle or the local favorite, a dark 'n' stormy -- head to the Swizzle Inn in Hamilton (3 Blue Hole Hill).

Editor's note: All of the excursions featured here depart from King's Wharf, because most mainstream ships are docked there for the duration of their Bermuda stays. However, if you are docked in Hamilton or King's Wharf, you should still be able to book similar either through the cruise line or independently.