You may also like
Dismiss
9 Baltic Sea Attractions for Return Cruisers
19 Great Culinary Shore Excursions
Things to Do in Southampton Before a Cruise
7 Things to Do Besides Shopping on a Christmas Markets Cruise
Sail Here, Not There: Avoiding Overtourism in Cruise Ports
8 Exhilarating Shore Excursions
10 Reasons to Stay in Seattle Before Your Alaska Cruise
10 Best Beaches in Mexico for Cruisers
48 Hours in Brisbane Before or After a Cruise
Cruise Beach Bars We Miss in the Caribbean 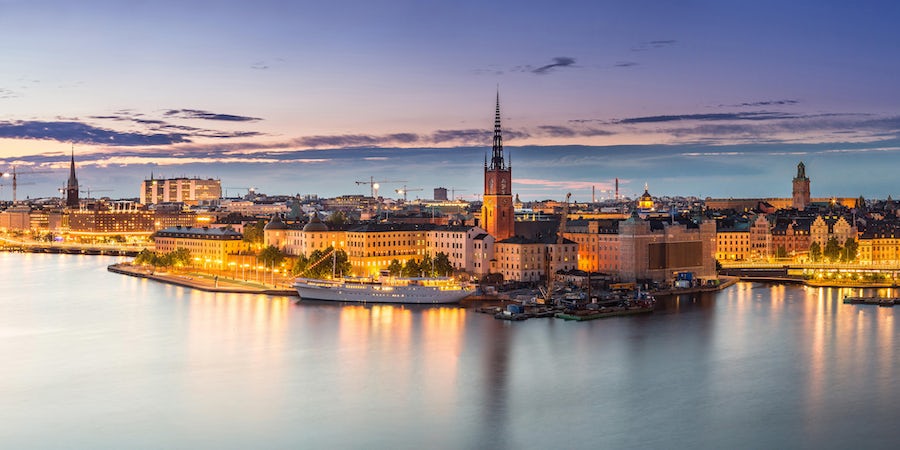 Whether you're touring tsarist-era palaces in St. Petersburg, Estonia's cobblestone alleyways or the islands of Stockholm, the Baltic's attractions and astounding beauty will wow you whatever you do. To give you a unique and immersive experience in each of these countries, we've highlighted a few of our favorite Baltic cruise excursions. Please note: Although these are popular tours, check with your cruise line before you book to ensure your preferred excursion is offered.

Copenhagen's most famous attraction is Tivoli Gardens, a 20-acre amusement park decorated with stunning rose gardens, amusement rides, restaurants and thousands of twinkling lights. If your ship stays late in port, choose an evening tour to Tivoli, often paired with a canal cruise or city highlights tour. Enjoy the lights of the park and the city from atop the Ferris wheel or the Star Flyer, the world's tallest swing-carousel -- or stay ground level and get a bite at one of Tivoli's cafes.

If you're only in Copenhagen for the day, many lines pair visits to Tivoli with a tour of Christiansborg Palace, the seat of the Danish Parliament. Visit the Royal Reception rooms and Great Hall, and then transfer to Tivoli for a walk around the lake or a ride on the 1914-built wooden roller coaster.

Copenhagen is home to several breweries, and beer-lovers can enjoy an introduction to local beer combined with some city sightseeing. Some tours visit the Carlsberg Brewery, one of the oldest in the region, where you can tour the grounds, including the old granary and sculpture garden. Others stop at Denmark's first microbrewery, Norrebro Bryghus, where you can learn about modern brewing processes and the company's latest recipe experiments. Some focus more on sampling craft beers in trendy parts of the city, such as the Vesterbro neighborhood (a former red-light district turned into a hipster enclave of galleries and bars).

A first-timer's tour of Helsinki must include the water -- after all, three sides of the city are surrounded by the Baltic Sea. You can take a leisurely sightseeing boat or a high-speed RIB (inflatable boat), but we vote for a kayak tour to really embrace the island scenery. As you kayak by beaches and rocky coastline, you'll learn about the history of the 300 islands surrounding Helsinki and the ecology and birdlife. A snack break on one of the islands provides some photo ops and fuel for your paddle back to base. (Those looking for an active land-based tour with more city sightseeing, should check out a bike tour of Helsinki instead.)

It's easy to explore Helsinki on your own, with shops and markets located within walking distance from the pier and an excellent tram system to take you to attractions such as Rock Church. If you prefer a guided tour, head out of town to the medieval Porvoo, Finland's second-oldest city. Walk its cobblestone streets, photograph its distinctive red warehouses and do a little shopping. Most Porvoo tours are combined with an additional attraction, such as a visit to Savijarvi Manor to see its horse farm and enjoy a Finnish meal, a tour of Malmgard Castle with its organic farm and brewery or a cruise to Haikko Manor and its beautiful grounds.

Oslo has an incredible collection of museums (such as the maritime-focused Fram and Kon-Tiki museums, Munch Museum and Nobel Peace Center), and there's no way you can see all of them with just one day in port. Hit the highlights with a tour to the Vigeland Park and Viking Ship Museum; some tours also add a visit to the Holmenkollbakken, where the 1952 Olympic ski-jumping competition took place.

The Vigeland Sculpture Park showcases more than 200 bronze and iron sculptures by Norwegian artist Gustav Vigeland; most depict the different stages of human life. The 55-foot-high granite centerpiece is impressive, with 121 figures of men, women and children. At the Viking Ship Museum, you can see three huge Viking longboats, as well as artifacts and treasures from Viking times. (Independent types can easily get to these venues on their own; the hop-on, hop-off buses stop at the park and the museum.)

People flock to St. Petersburg to see the city, an incredibly well-preserved metropolis more than four centuries old, and its tsarist-era treasures. Deciding how best to maximize your two or three days in port and combine tours to see all the highlights is a challenge. The best choice for first-timers is to book a two- or three-day package, and leave the scheduling to knowledgeable local guides.

Related: 7 Challenging Cruise Ports We Can Help You Navigate

Depending on the number of days you're in port, you'll see the Hermitage (a former home of royalty, now the world's second-largest art museum), grand palaces like Catherine Palace in Pushkin or Peter the Great's Peterhof, bulbous-domed churches and the Peter and Paul Fortress. A canal cruise is often included as well. Guides will adjust the schedule to get early entrances and time the order of attractions to squeeze the most out of your short visit.

If you've already visited St. Petersburg, consider touring another remarkable Russian city with an all-day (roughly 17 hours) tour to Moscow. Your day will begin and end with a four-hour high-speed train ride from the port. (Some luxury lines offer one-hour flights instead.) Be prepared for a long day in the Russian capital that squeezes in all the highlights, such as Red Square, Lenin's Tomb, the Kremlin and iconic St. Basil's Cathedral. Depending on your tour, you might also tour the Kremlin's Armoury Chamber (full of royal jewelry and Faberge eggs), visit a cathedral or take a ride on the Moscow subway. Most trips include some meals, either on the train or in a local restaurant; leave some time for lunch on your own in the city.

It's hard to visit the historic city of St. Petersburg and not visit the ballet -- it's as integral to the culture as the vodka you sip during dinner. Evening tours to the ballet take cruisers to one of St. Petersburg's traditional concert halls, such as the Mariinsky or Mikhailovsky Theatre, where they'll be transported into a world of grace, elegance and timeless beauty. You'll watch classics, like "Swan Lake," "Giselle" or "Sleeping Beauty," or you might see a selection of scenes from a variety of shows.

While most Russians will dress up for the ballet, tourist attire varies widely; if you have time to change between your daytime tour and your ballet departure, it's always fun to dress up for the event.

One of our favorite Stockholm attractions is the Vasa Museum, which houses an intact 17th-century warship that was pulled out of Stockholm's harbor in the early 1960s after it sank on its maiden voyage in 1628. Tiered balconies let visitors view the ship from all angles and appreciate the intricate detail work on its hull; exhibits and short films educate visitors about the ship, including the sinking, finding and raising of the Vasa. Cruise travelers can choose from a variety of tours that include a visit to the Vasa, so pair it with the attractions that speak most to you: a visit to city hall, a walking tour of the Gamla Stan (old town), a harbor cruise, the SkyView glass gondola ride or the ice bar.

See the city like few have seen it before with an historic and panoramic rooftop tour. You'll start in Riddarholmen, the former home of a 13th-century Franciscan monastery, and will ascend to the top of the Old Parliament Building, don a safety harness and begin a guided sky-high walking tour. The guide will share stories and views of Stockholm as you stroll above the buildings. Afterward, you can feel the ground beneath your feet once again with a street-level walk around Stockholm's oldest quarter, Gamla Stan.

Most cruise visitors to Tallinn make a beeline for its Old Town with its cobblestone streets, medieval architecture, domed Russian cathedrals and outdoor market. You can easily tour Old Town on your own, so try something different with a cycling tour through countryside or neighborhoods that finishes within the walls of the medieval city.

Cycling routes vary by cruise line. Some take visitors to the parklands of the Rocca al Mare Open-Air Museum, with sea views and wooden buildings. Others cycle through Kadriorg Park to see the presidential palace and Peter the Great's baroque summer palace, as well as the Song Festival Grounds. A few visit trendy neighborhoods, such as Kalamaja and Telliskivi Creative City, where art studios and cafes have taken over a former industrial complex. Most cycling tours end in Old Town's Town Hall Square with free time to shop, snack or explore.

If you're more interested in consuming calories than burning them, a chocolate-making workshop tour is a great way to see Old Town, interact with local artisans and get a sweet treat. Cruise lines offer two versions of this tour. One takes you to Tallinn's Chocolaterie de Pierre, which specializes in cakes and truffles. There, you'll get a hands-on lesson in truffle-making from a professional pastry chef and chocolatier, and learn about the history of chocolate. The other visits the Kalev chocolate shop, where you'll sample the marzipan that Tallinn is known for before learning how to make and fill chocolate truffles.

The Highlights of Berlin

Most visitors, especially first-timers, leave the port of Warnemunde for a long day's journey to the bustling city of Berlin. The various 12-hour tour options are nonstop -- Berlin is roughly a three-hour train ride from Warnemunde -- but they'll take you to all the key sights. You'll see Cold War relics, including a surviving section of the Berlin Wall and the infamous Checkpoint Charlie; the Brandenburg Gate and the Reichstag (parliament building) with its glistening glass dome roof. Most tours include a typical German lunch. Some tours also include a boat tour on the Spree River, free time at the Kurfurstendamm shopping boulevard or a longer stop at a museum. Independent types can choose tours to Berlin that are transportation-only or a combination of a morning tour with afternoon free time.

Cruisers who have previously been to Berlin or don't want the rush-rush nature of a highlights tour can see a different side of German culture with a visit to Schwerin and its 19th-century castle set on an island. You'll take a motor coach along the Autobahn, a boat ride on Lake Schwerin, a walking tour of the city center and possibly a trolley train from downtown to the castle. Inside the castle, you'll see living areas and ceremonial rooms, many of which now exhibit art and cultural artifacts. Plan on a lot of walking and don't forget your camera.