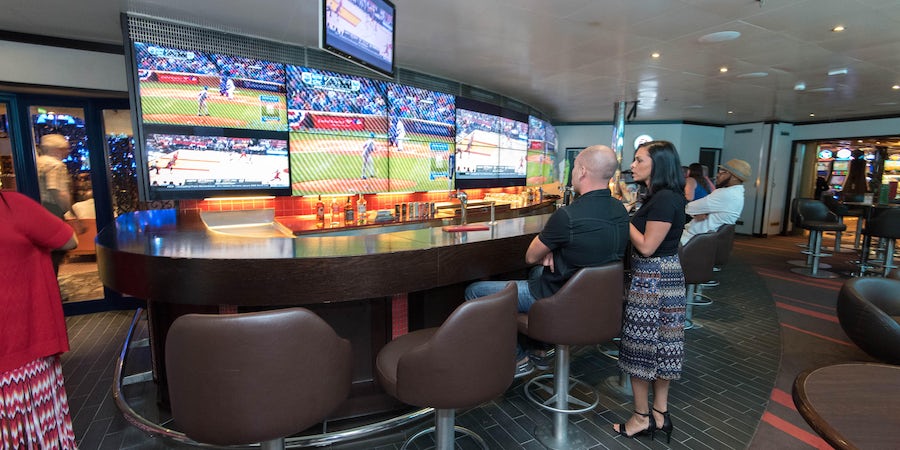 Afraid of missing a key NFL game while on vacation? How about not being able to play golf or basketball while at sea?

Well, sports fans, go ahead and book that cruise of your dreams. Most cruise ships have sports courts and sports bars onboard to satisfy most enthusiasts. Playing and watching sports can even be the focus of your journey with sports-themed cruises or fan cruises where you travel with renowned sports celebrities.

No matter which sport floats your boat, there's a perfect cruise out there for you.

Playing Sports on a Cruise

There's no shortage of sports activities to keep travelers moving while cruising, especially when sailing on larger ships. Even smaller cruise ships offer active games, such as Ping-Pong, shuffleboard, and putting greens to challenge your skills.

The SeaPlex complex on Royal Caribbean's Odyssey of the Seas boasts the largest indoor active space on a ship with a full-sized sports court. MSC Meraviglia also has an indoor Sportsplex, with a sports court and other sports-themed activities.

Golf: Golf enthusiasts will be happy to know that nearly every ocean and river ship features some form of golf-inspired activity. Offerings run the gamut of driving cages and golf simulators to putting greens and mini-golf courses.

Many lines, even smaller ones such as Oceania, feature driving cages. Queen Mary 2 is one of several cruise ships with golf simulators. The ship's version, The Fairways, takes two hours to play and includes 40 of the world's best courses, such as Pebble Beach, Pinehurst and St. Andrews in Scotland.

Putting greens are available on most ships, with some designed to be more elaborate than others. Luxury lines that feature them include Viking Cruises, Regent Seven Seas, Oceania, Silversea and Crystal Cruises. Even most river ships, such as Emerald Waterways' Star-Ships and select AmaWaterways ships, have putting greens on their sun decks.

The newest onboard racket sport is pickleball, and you can find pickleball courts on Sky Princess, Enchanted Princess, Seven Seas Explorer, Seven Seas Splendor and all of Holland America's ships. Princess and Holland America host open play sessions or meet-ups to learn the rules of the game. Check the daily schedule for pickleball tournaments -- offered when there's enough interest.

Other sports: Other sports offerings on larger ships include baseball batting cages, bowling alleys, surfing simulators and go-karts. For those interested in quieter pursuits, many ships feature outdoor deck areas that are home to bocce ball courts, croquet or shuffleboard.

Princess Cruises is one of the lines with batting cages. If you're into bowling, check out the 10-pin bowling lanes on select ships of Norwegian and MSC. For outdoor adventure, give surfing a go on FlowRider, a wave simulator, on several Royal Caribbean ships. If car racing is your sport of choice, then hit the top decks of the Norwegian Joy, Bliss, Encore or Escape to ride in the fast lane on the only go-kart racetracks at sea.

If you prefer to sip a Pimm's Cup while playing a game of croquet, Cunard or Celebrity might be your line of choice, while Viking Cruises' sports deck entertains passengers with shuffleboard and a bocce ball court.

Watching Sports on a Cruise

What do you do if it's game day, or there's a significant sports event that you want to watch? That depends on the cruise ship and the event.

Most major NFL games and other nationally televised and international sporting events will be shown in one of the sports bars, lounges or on the big screen by the pool. These will be televised through an internal feed. If you want to catch the game in your cabin, that's more of a challenge. One example is Monday Night Football. It's shown on ESPN and that channel is not available in all cabin staterooms.

Cruise lines that do have ESPN and ESPN2 on the stateroom lineup include Royal Caribbean, Disney, Holland America and Carnival. The live satellite feed, which impacts transmission to the staterooms, depends on the ship's position and other external factors. Streaming would be an option, but the internet is slow at best on most ships, so it's not a reliable alternative most of the time.

Royal Caribbean is in the process of expanding its sports coverage on eight ships by spring 2020. The additional broadcasts will include NFL, MLB and NBA games, NASCAR, Indy Racing League, golf and tennis Grand Slam events, UEFA Champions League, the Network, ESPNU and more.

When its's NFL game day, some ships feature unique offerings. Princess Cruises broadcasts Thursday, Sunday and Monday night football along with playoff games, conference championships and the Super Bowl on its Movie Under the Stars poolside LED screen. Tailgate onboard with "Game of the Week" parties that include beer buckets, pizza, hot dogs, burgers and sports-inspired cocktails.

Sports-themed bars can be found on most larger ships. With multiple TV screens, sports paraphernalia and beer and appetizer specials, these venues are the ideal place to catch a game and check out the scores of your favorite teams. Other options for viewing the game include the ship's pubs, casino bars and lounges.

Playmakers Sports Bar & Arcade spans the entire length of one side of the Boardwalk neighborhood on Royal Caribbean's and Symphony of the Seas. It boasts more than 30 TV screens broadcasting international sports matches and an attached arcade with shuffleboard tables, computer games and Skee-ball. Game-themed cocktails (think Goal Post Margarita and Knockout Punch) round out the menu of casual grub fare.

A different version of this adults-only venue can be found on Mariner, Independence and Navigator of the Seas is coming to Freedom, Allure and Explorer of the Seas in 2020. Odyssey of the Seas will debut with the sports bar.

For nonstop sports on Norwegian Cruise Line, head to O'Sheehan's Bar & Grill or The Local Bar & Grill, depending on which ship you're sailing. These casual pub-style restaurants are open 24 hours a day and have views overlooking the atrium, as well as TVs showing the game. Several outposts also have a game arcade, darts and bowling lanes.

While in port, book excursions to either play or watch your favorite sport. These can include everything from booking a round of golf on one of the world's renowned courses to watching a surfing competition in Hawaii. If your desired sports-themed excursion isn't available through the cruise line, search for a company that offers shore excursions tailored to your sport.

Golf excursions are offered on select cruise itineraries that call on ports in destinations such as the Caribbean, Mexico, Bermuda and Scotland. Several lines, such as Viking, also feature courses in unexpected destinations, such as a nine-hole game of golf at the scenic Valley of the Eagles Golf Club, located on the banks of the Chilkat River in Haines, Alaska.

Top surfing competitions, such as Vans Triple Crown of Surfing, take place on Hawaii's North Shore between and . This is when the best surfers in the world hang on the best waves in the world on the North Shore of Oahu. Celebrity, Princess, Holland America and Carnival are several of the lines that cruise to Hawaii during those months. Carnival also offers excursions to both the North Shore of Oahu and Honolua Bay on Maui, where you can give surfing a go.

Sail onboard America's Cup winning Stars & Stripes or one of its contenders for a 12-meter yacht race you'll never forget. This excursion is offered in St. Maarten by many lines calling on the Caribbean port, including Princess, Viking, Norwegian and Royal Caribbean. Race with or against fellow passengers in the regatta. Afterward, celebrate your success with a rum punch ashore.

If winter sports activities are your passion, Viking Cruises offers a day of skiing western Norway's largest ski resort on its In Search of the Northern Lights cruise. Another option is skiing the Nordic way with a scenic cross-country excursion. Several winter itineraries also offer the opportunity to learn the sport of curling with a pro. Hit the ice for a game of "chess on ice" in a friendly competition with fellow passengers.

If that's not enough, other sporting events include Disney's 5K race which is held every time the ship calls on the line's private island, Castaway Cay.

Several lines offer sports-themed and fan cruises, where you can sail with your favorite sports stars, attend major sporting events or focus on your favorite pastimes in port. These cruises might offer exclusive onboard parties for theme cruise passengers, meet and greets, lessons and workshops, and themed events onshore.

Event cruises: If high speeds and hairpin turns give you a thrill, book a theme cruise to attend Monaco's Grand Prix. Windstar's program typically includes tickets to the race, race day brunch, visits to the pits, a Grand Prix-themed cocktail reception and dinner onboard. Azamara's option offers an excursion that includes a private escort to the festivities and central Stand K seats during the race.

If tennis is your sport, attend a match at the Australian Open during a cruise with P&O. Fares include three days of general admission tickets to Australia Open venue Melbourne Park, including Ground Pass tickets and transfers to and from the grounds. Look for tennis-themed entertainment on the ship, opportunities to meet tennis celebrities and matches screened live while you're at sea.

Passenger participation cruises: If you'd rather play than watch, look for sports-themed cruises with a focus on passenger participation. Golf is the most popular theme cruise for active travelers. Azamara partners with PerryGolf on its golf-intensive sailings. These include PerryGolf staff onboard and excursions to some of the world's top golf courses.

With Crystal, you'll sail with PGA celebrities, get tips on your golf game from the pros and play famous courses around the world. Cunard, Norwegian, AmaWaterways and European Waterways are some of the other lines offering unique golf voyages.

Third-party providers also put together golf theme cruise charters. Kalos Golf partners with luxury lines Crystal Cruises, Ponant and SeaDream Yacht Club and river cruise line AmaWaterways on golf-intensive sailings offered around the world. Most of these cruise ships will be filled with golf fanatics, but they will also provide activities for nongolfing travel partners. GolfAhoy offers golf packages that will set you up with tee times ashore but do not include onboard support or lessons.

As for other sports, Holland America is offering its first ever pickleball theme cruise in 2020.

Football fan NFL cruises pack ships with supporters of and players from teams, such as the Philadelphia Eagles, Dallas Cowboy, Green Bay Packers and Miami Dolphins. Enjoy NFL-focused events and parties, meet and greets, photo opportunities with celebrity players and other perks. Fans of college football can also find theme cruises with legends from teams such as the Alabama Crimson Tide and Florida Gators.

Baseball fans can join the occasional MLB baseball cruise, with recent cruises highlighting stars of the St. Louis Cardinals and Philadelphia Phillies. Sailings often have a charity component, in addition to exclusive cocktail parties, Q&As and photo and autograph sessions. MSC has even offered rugby-themed cruises with famed stars of the sport.