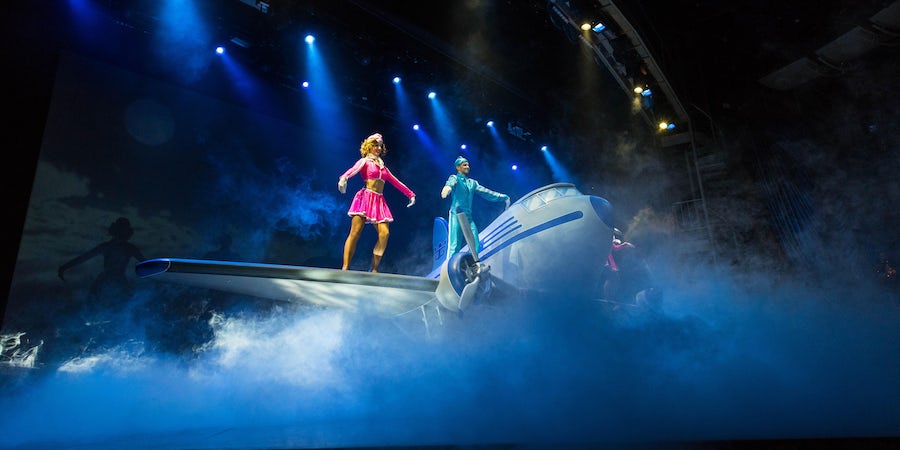 Come Fly With Me Performance on Oasis of the Seas (Photo: Cruise Critic)

Oasis of the Seas Entertainment and Shows

If you're planning out your entertainment on Oasis of the Seas, you'll want to grab a pen and paper first, as well as a calendar. While the ship has several shows in its multiple venues, not all run every day, and if you really want to get into a specific seating, you'll need to make your reservations in advance.

To get the most out of your cruise, we recommend that you book the Oasis of the Seas shows first, and then plan your meals and specialty dining reservations around your tickets.

If you have young kids and set-seating dining, you'll have to plan on having a few meals outside the main dining room, as some of the early shows conflict with the first seating.

If you haven't made reservations before you board, you aren't completely out of luck. Line up at the theater 15 minutes before the doors open, and you might get a seat. We noticed empty spots at most performances, except those in the AquaTheater.

Here is a list of Oasis of the Seas' shows.

Note: Show information was up to date at the time of publication but is subject to change at any time.

The Broadway musical "Cats," performed in the Opal Theater, is an odd fit for Oasis of the Seas. Sprawling and without a central plot or too many recognizable songs, the show runs too long for many Oasis passengers; most people left during intermission. That's a shame, as the singers and dancers were terrific. Look for them performing standards or pop favorites in other venues during the cruise.

Because Studio B is a multipurpose theater, it only serves as an ice rink on certain days during the cruise. The "Frozen in Time" show interprets familiar Hans Christian Andersen fairy tales, such as "The Emperor's New Clothes" and "The Ugly Duckling" on ice, with a high caliber of talent. Kids will love this one.

The premier show in the AquaTheater often has to be adjusted because of winds or weather conditions. Of all the shows on Oasis of the Seas, this one has the most demand.

The Headliner show changes from cruise to cruise, so you will likely book this performance in the Opal Theater without knowing exactly what you're in for. On our cruise, the headliner was a ventriloquist; on the sailing before, ABBA impersonators were on tap.

This second show in the AquaTheater doesn't have the multimedia visual effects of Oasis of Dreams, but it's still fun (and you're less likely to encounter crowds). This one is also frequently rescheduled when wind and weather issues arise.

Come Fly With Me

Acrobats fly in this unique Opal Theater show that will appeal to Cirque du Soleil fans. Keep in mind that the show relies on computer generation and effects, and if that's down, the show will be canceled (as it was on our sailing, several times). What we saw seemed amazing.

Oasis of the Seas has its own comedy club, Comedy Live, with at least two performances nightly -- and almost all of them fill up. Book online, or go early to get in line.