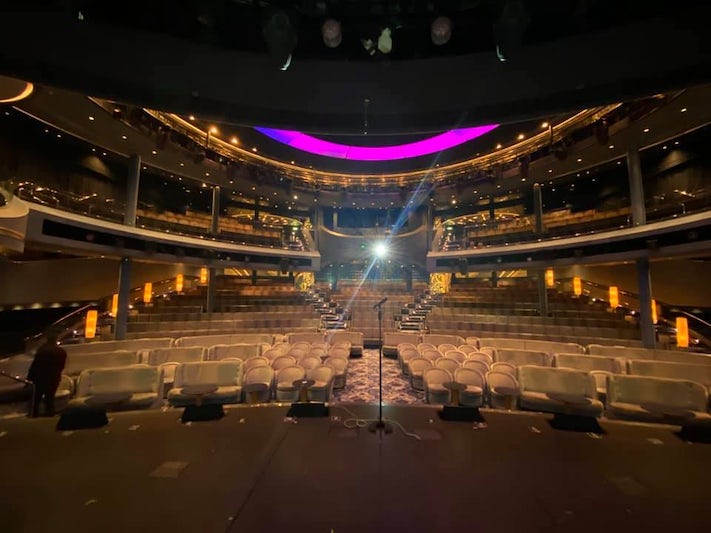 See all photos
Cruiser Rating
3.8
Average
76 reviews
Ratings by category
Featured Review
P&O service gone downhill.
"Within a day of departure people were falling ill but preventative measures such as no self-service in the buffet were not put in place till the last day of the cruise.It may well have been that particular ship, the Arcadia, but had that of been my first cruise with P&O I would be in no hurry to go back...."Read More

Deck Cargo
10+ Cruises • Age 70s
Went on Arcadia for new year with my wife, this was our fifth time on Arcadia and we basically thought most things had gone downhill, so are listing our thoughts as pros and cons: - Pros: • The Main Dining Room, considering all the negative reviews the food quality was much better than expected • It was good to see that some of the pre-Covid onboard staff have returned to the ...
Read More

Alco1402
6-10 Cruises • Age 60s
I have cruised with P&O several times in the past and have always recommended them above the likes of Royal Caribbean because the service has traditionally been so much better. Not this time. It may well have been that particular ship, the Arcadia, but had that of been my first cruise with P&O I would be in no hurry to go back. There was sickness on board (Norovirus) that was very badly ...
Read More

Evaskitas1947
First Time Cruiser • Age 70s
Note: I have copied this verbatim from other social media sites where I have posted. Partly because it is tedious to retype the same words but also because it still makes me angry to relive the experience. I should start by saying this was our first ever cruise so we have nothing to compare it to and it was a 10 day Baltic cruise on Arcadia. In fact that doesn’t matter because this cruise ...
Read More

inspectorroddy559
10+ Cruises • Age 70s
My wife and I went on the Arcadia Christmas cruise to Norway and Denmark on 19th December 2019. We have not been on this ship before but have been on other P&O ships. I do not know how this ship gets bad reviews, mind you looking at some of the passengers I don't think they would enjoy anything. The ship was clean and tidy and well decorated for Christmas. Yes there are a few paint chips and ...
Read More

Don’t be put off by poor reviews

susiepops
2-5 Cruises • Age 60s
We really enjoyed our 14 night cruise to the Baltic. We have cruised with Cunard, Celebrity and P&O in the past and Arcadia exceeded our expectations. Admittedly, the atrium doesn’t have the wow factor of other ships but it more than compensated in terms of friendliness and entertainment. We found the food in the dining room consistently good both at lunch and dinner. The buffet could be very ...
Read More

thomag63
2-5 Cruises • Age 50s
This was a special holiday for us – my mum was 80 last year and always wanted to visit St Petersburg, but she won’t fly – so a Baltic cruise we thought would be ideal. This was our second cruise we had wanted to book the cruise to the Baltics last year but had left it late to book, as there was 3 of us and we couldn’t get a deal for a cabin for 3. Last year we went on a short cruise (6 days) with ...
Read More

A trip around the Baltics

Shazzy B
First Time Cruiser • Age 60s
We chose this cruise as we had been on this ship last year so we were familiar with the layout. We had been recommended to do the cruise around the Baltics by several people who were on last years cruise, The embarkation for the ship was fantastic, within half an hour of us arriving at the port we were on the ship. The only thing that held us up was trying to find a porter with a trolley to take ...
Read More

SwadFox
6-10 Cruises • Age 60s
Always wanted to go to the Baltics, but this cruise stood out as not many go to all the Capital cities plus St Petersburg, but this one did and the ports of call certainly didn't disappoint. St Petersburg was the stand out highlight , but Stockholm, Helsinki, Copenhagen, Oslo and Tallin were also excellent stops. Embarkation/Disembarkation was extremely smooth and easy. We went on Arcadia ...
Read More

Amazing two weeks in the Baltic

Flydavidjj
2-5 Cruises • Age 50s
We'd not cruised for nearly 20 years, and this time had a (now) grown up 19 year old daughter and an 83 year old mother in tow. We chose the Baltic as I had Danish heritage and we wanted to go somewhere we'd not normally visit. We had connecting balcony cabins on E deck (E152/E156). The steward opened the balcony so we could share it, and we found the space and cabins really comfortable. ...
Read More

Tony4517
2-5 Cruises • Age 60s
This was our third cruise with P&O and to say we were disappointed with the ship would be an understament. The locations we visited were spectacular, the crew and staff could not do enough for you, but the ship and P&O seem to be failing in many areas. The following is just a few examples of the issues we had on the cruise, some may seem trivial but all together they had an effect. The ...
Read More

Cabin Type: Inside Stateroom with Shower