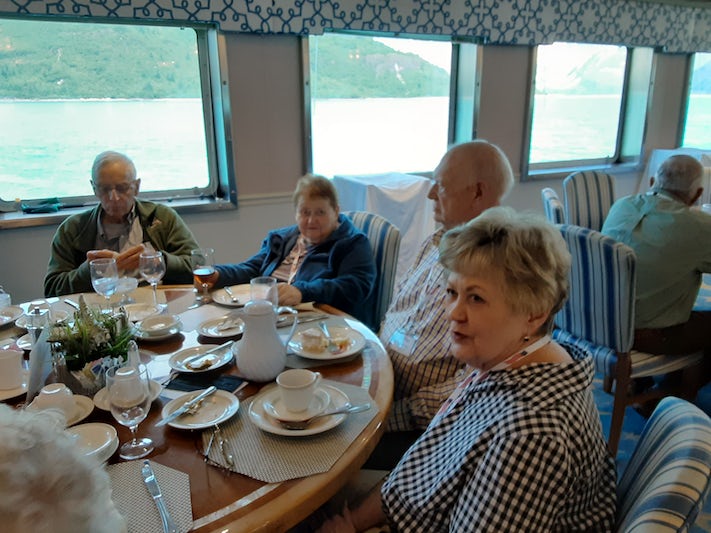 A Fabulous Time Amid the Chaos!

Tennis Addict11
2-5 Cruises • Age 60s
I made a couple of posts on the American Cruise Lines Group before our 8/23 Grand New England Cruise expressing concern over whether it could live up to the fabulous experience we had with Viking on our first cruise two years ago after reading so many brutal reviews on Yelp and Cruise Critic. Well, about everything went wrong on this cruise that could go wrong and we had an absolutely fabulous ...
Read More

TheNancys
10+ Cruises • Age 70s
Grand New England Cruise We just returned from this cruise in August. This was one of the most frustrating cruises we have ever been on. At the same time, it was pleasant because of the places we visited (from Boston to Bar Harbor), the small size of the ship and the lengths that the crew on board went to make lemonade out of lemons. For example, we had 2 special events planned for our ...
Read More

UMCADS
10+ Cruises • Age 60s
I selected this cruise because the route sounded interesting and it was all I could find last January. BIG MISTAKE !!! This ship reminded me of something you would find plying the Volga River in about 1975. Outdated and never up dated is the name of the cruise. Ship built in 2005 and not maintained very well. The staff for the most part were kids that had no idea what their job was. The food, if ...
Read More

Cruzlover115
10+ Cruises • Age 50s
Beware! This cruise is unsafe, hazardous, a liability, and a tragedy waiting to happen. The facts are that they are grossly understaffed and the crew that is aboard is negligently trained; they are incompetent and uninformed. The staff is not fully vaccinated, although the Manager of the Hotel, has lied and sworn they are, the Captain and Medic aboard has verified otherwise. The majority of the ...
Read More

DiningDave
10+ Cruises • Age 60s
The ship, while only 3 years old (we were told) has not been maintained; Surface rust on the outside of the ship and more worrisome appearing rust on the support cables for the tender. Stained carpet and upholstery as well. Ship was short staffed and the staff that were provided were poorly trained. Food was bad and rarely served as ordered. Chef staffing deck food bar was ornery and ...
Read More

A most unpleasant cruise

Review for Independence to U.S.A.

LLO349LLO
10+ Cruises • Age 60s
This cruise ship, Independence of the American Cruise Lines was the worst ship I have ever been on and I have been on quite a few cruises. Our room was very dirty; huge stains on the carpet; furniture that you would not even attempt to sit in; bathroom was also very dirty. Housekeeping was minimal at best. The ship broke down, one generator totally died and the other one was getting close ...
Read More

Ship was not sea worthy!! Broke down costing 2 days of ports.

Review for Independence to U.S.A.

trogg1956
2-5 Cruises • Age 60s
The ship was dated and really not sea worthy. It appeared as a rust bucket upon boarding and it was. The room was old and dated, crappy bed, filthy shower and bathroom area. The crew was all new and was really not trained to run a cruise ship. We were ripped off for 11,000. This was the absolutely worse money grabbing experience we have ever had. TOTAL ROBBERY!!!! The redeeming factor was the ...
Read More

twototravel
6-10 Cruises • Age 60s
Although we had quite a few little issues on our cruise, overall it was nice. The ports and excursions were great, albeit a bit disorganized at times. Food was good with lots of seafood and fish, especially lobster. Cabin is big, bigger than most on small ships, as was the bathroom. We did have a shortage of bathroom amenities at first, but that was fixed when they received supplies a few days ...
Read More

Review for American Pride to U.S.A.

cburkhar
2-5 Cruises • Age 60s
We chose this cruise as to imagine what it was like that Lewis and Clark went through. We had a historian on-board who gave 50 minutes discussions each day about the areas we would go to. He would even ride the bus with us at times to explain even more of the area we headed to. Geography/landscape changed along the way. Starting out in canyons to hilly green tree areas as you go west. Go ...
Read More

phyllis78
First Time Cruiser • Age 60s
We chose this cruise based on a previous experience with the company. My Mom couldn't say enough good things about American after her first cruise. She then spent nearly $20,000 for us to take a mother /daughter trip. For the last 2 years we had looked forward to the immaculate ship, personalized service, and fine cuisine, she had experienced. We had not had the opportunity to travel together ...
Read More