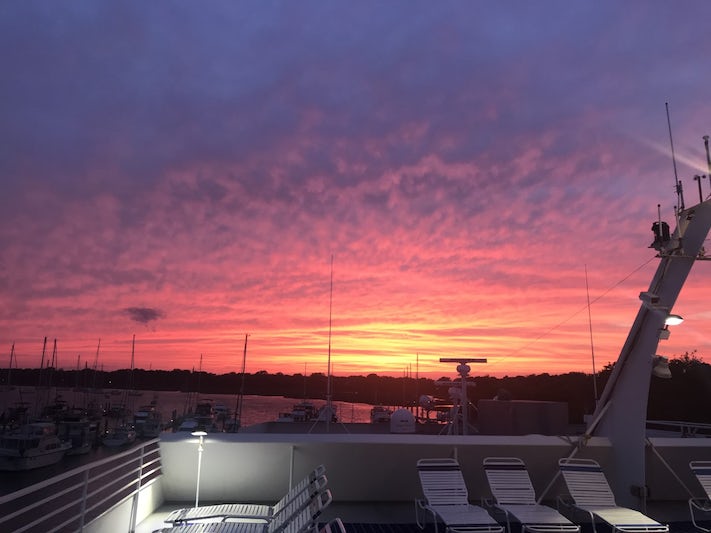 Costly for a mediocre experience.

hkingj
2-5 Cruises • Age 80s
Would not recommend to others. Food and service only fair. Overall rating on scale of 1-10 would be seven (7).Cruise director attractive and friendly but inefficient. Made a number of mistakes for our group on excursion scheduling. Hotel director inexperienced as was the entire crew. Cabin service was ok but not great. On two occasions room was not made up until the afternoon and then only ...
Read More

C R
2-5 Cruises • Age 70s
A great cruise on a small boat - about 100 people. Smaller makes for more friendly. The chef told us at the beginning we would be eating lobster daily and that we did, at nearly every of the 3 meals a day. The lobster omelet was especially tasty. The on land trips were informative and we were allowed time to go out on our own as well. The cruise director Chelsea was just full of enthusiasm ...
Read More

Bill and Judy
10+ Cruises • Age 70s
We chose this cruise for our second one with ACL for two reasons: we are very impressed with the service and atmosphere of this cruise line and it was a lobster cruise. Yes, this ship was an older one, but that did not interfere with its charm - of course we prefer the personal service the smaller ships provide rather than the glitz and glam of the huge hotels on water. You will get to know ...
Read More

Happy Cruiser
2-5 Cruises
About two years ago we did the Lobster Cruise out of Portland, Maine. That was so good we booked this one out of Providence, RI. We were not disappointed. I like the American Cruise Line because of its informality. You do not need dress up clothes like you do on the big ships. You may want to take a few extra tops to wear in the evening to gussy up a bit but just a little bit. It is very ...
Read More

awbarnett
First Time Cruiser • Age 70s
We decided to take a small boat cruise for our 1st cruise. There were only 70 people on board.There was open seating in the dining room. You got to talk to everybody. There was an open bar at cocktail hour and dress was casual. The food was fabulous. The cruise was more a relaxing cruise for people 50 and over even though we had 2 families with pre-teen-teenagers. It was more expensive than some ...
Read More

Sandykin
10+ Cruises • Age 70s
This was our 7th cruise on American Cruise Lines and our first on the American Star. We selected the New England Islands in June to hope for the best weather without too many summer crowds. We started in Providence, RI and stayed at the Hampton Inn at the airport. The shuttle service not only picked us up from our flight but drove us to a nearby Starbucks the next morning. We were greeted at ...
Read More

PaigeP Michigan
2-5 Cruises • Age 50s
Cruised from Providence, RI (actually ended up leaving from Fall River, MA due to a port change). Traveled with my father, who is 78 and in good health. I'm 51. I was the second youngest person on the cruise. There were no children on this cruise - but there's no pool on the ship, so if I were a kid, I'd choose Disney. ; ) American does a great job of providing transportation to and from the ...
Read More

DJRoman
First Time Cruiser • Age 60s
While searching for a vacation destination, We have certain criteria. We wanted to be able to drive to the ship. Since it was our first cruise, we wanted a 6-night excursion. The cruise of the New England islands fit the bill. From the moment we were invited onto the ship, we were treated exceptionally well. Everyone was cordial, and went out of their way to please us. The stateroom was more than ...
Read More

Not your typical cruise - and proud of it

7960Ken
2-5 Cruises • Age 60s
First, we chose this cruise based on its destination and ports. We wanted to visit Nantucket and Martha's Vineyard, but did not want to drive in the local traffic. As avid cruisers, this looked like the perfect option. With that said, everyone else on this cruise seemed to choose this cruise based upon the cruising style - very small ship and crowd. The majority of our shipmates were 65-85 with no ...
Read More

gordon4109
10+ Cruises • Age 70s
This past summer I had the pleasure to be a passenger on the Inaugural Cruise of American Cruise Lines newest ship, the "Independence" with an itinerary which included New England and Maine ports of call. Over the past 10 years I was also fortunate enough to cruise on the "Maiden Voyages" or "Inaugural Cruise" of all of their other ships. This trip was the 10th cruise I had taken since ACL resumed ...
Read More